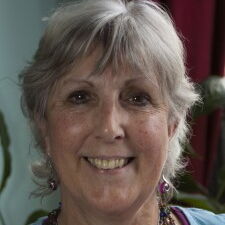 After spending 23 years squashing my writing into the gaps between  everything else a working mum does and then wondering why I was getting rejection letters by the tonne, in January 2000, I had a near-death experience that changed my life.
It was the wake-up call I needed: I left my job as a special needs teacher and gave myself one year to focus on my dream to be published. It was a huge risk, but it worked! Four months later I had a contract to write two books and since then, I've written nine other books for the teenage market.
My latest book is called In The Stars and it's for Young Adults who are reluctant readers. In terms of the plot think: Romeo and Juliet meets Love Story! I've also written Toxic Treacle which is very different from my previous books in that it's a dystopian thriller aimed at the Young Adult market. It's about a boy called Monkey who lives in a world where males and females live totally segregated lives. It's Monkey's attempts to find his father - with the help of Angel, the girl he loves - despite the laws that prohibit them being together. There's intrigue, murder and forbidden love.
Five of my books are about a  girl called Magenta Orange who is a walking disaster. And, although the books are aimed primarily at the girls' market, I've had excellent feedback from boy readers too.
My other books include a time-travel ghost mystery story ; Mimosa Fortune and the Smuggler's Curse and two teenage gangster comedy books; Blaggers and Diamond Geezers .
I've also written two short ghost stories: The Scream, which was published in a teenage anthology and is now being used by Cambridge University Press for KS3 students and The Footsteps which appeared in 366 stories for 5 - 11 year olds.
I love visiting schools. It not only keeps me in touch with my target readership but it's also extremely rewarding.
My schools' visits fall into two categories:
Author talks, in which I not only track the story of a book from idea to bookshelf, but I also talk about the difficulties I've overcome in my own life to become a published author - from failing O Level English (twice!) to having the near-death experience that led me to give up my day job and become an author. Both staff and students have described my talks as `inspirational'.
I also teach creative writing workshops to students from Year 5 right up to adult level. I do several types of workshop, all of which incorporate the SEAL objectives and details of which are on my personal website www.echofreer.co.uk. If you don't see what you're looking for, I am very adaptable. If you have something specific in mind, please contact me and I'll do my  best to accomodate your needs.
In addition, I have given radio interviews, newspaper interviews, appeared at festivals and given talks to other organisations such as libraries, hospitals, adult reading groups, OAP clubs as well as delivering speeches and presenting awards at more formal occasions.
I live in London, but I'm happy to travel anywhere in the world.
Thank you for reading my page - I hope you've found it useful.

What people have said about my books/talks/workshops:
`...The day was fantastic and the students' outcomes far exceeded expections. This was a powerful experience and these students feel inspired to continue...' Louise Kanolik -  Loxford School of Science and Technology.
`Echo.. has a brilliant comic touch.' (Redbridge Literature Festival)
`Echo was fantastic.' English teacher - Year 8.
`So chilling you'll want your mum.' Teen Now
`A great communicator.' LK - school librarian.
`It was great!!' Faye -  Year 7  student.
`I loved this book!' John - reader.
`Toxic Treacle is the best dystopian book I've read.' Bookaholics Book Club.
`I would recommend this to other schools. It was very informative, interesting and supportive.' J.Robertson - Primary Deputy Head Teacher.
`Extemely funny.' Naomi - reader.
`..superbly written. The author knows a lot about teenage girls and their attitude.' Charlotte - reader.
`10/10. It's the best book I've read so far.' Rhianne - reader.
`Hilarious!' Huyana - reader.
`Echo Freer has created a sinister world that is both absorbing and terrifying!' Parenting Without Tears
`Toxic Treacle is brilliant!' Teen Librarian

I have written ten books, including:

Mimosa Fortune and the Snuggler's Curse

The quirky quest of a pyschic time-traveller.

A dystopian thriller for Young Adults. Recommended for Year 9+

YA book for reluctant readers. Jaz & Dex are 16 and in love. Except that Jaz' parents don't approve. When Jaz gets ill, Dex is desperate to see her to help her through her illness. But can he win her parents round?

A comic tale of gangsters, first love and the crooked path to the straight and narrow.

A comic thriller to die for.

The life and loves of a disaster-prone teenager.

Magenta in the Pink

The accident prone diva gets involved with the schoo play.

Magenta goes to the school summer camp with disasterous results.

Holiday havoc with our hazardous heroine.

The riotous revels of a rock chick. Published June 2008