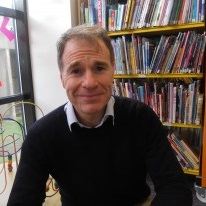 I am a children’s author and former primary school teacher and my trilogy of books feature a gang of kids who become superheroes. The Fabulous Four Fish Fingers was published in 2013 (to acclaim from critics, praise from educators and silly giggles from 8 year olds who love jokes about pants). The follow up, Frozen Fish Fingers is set in the Transyldovian mountains and the third book Fish Fingers vs Nuggets features supervillain aliens who are the same size and shape as chicken McNuggets but they wear very tight trousers. I have visited over 300 schools and appeared at umpteen literary festivals.

My author visits kick off with a whole school assembly where I perform role play with four children who transform into superheroes and play the ukulele very badly. For the rest of the day I put on interactive writing and drama workshops in classes from Year 2 to Year 6, based around the superhero theme.

Before I became a writer and teacher, I worked in TV for over 20 years.  I started as a news reporter for the BBC, Tyne Tees TV and for a Japanese broadcaster. I joined a Russian circus, abseiled off Durham Cathedral and interviewed a man who trained worms how to dance. As a TV producer, I reunited the last surviving Oompah Loompas and filmed the party of the year at David Beckham’s house (but spent the whole night stuck in the kitchen). I even got to direct Emmerdale and Coronation Street but it was never as much fun as telling stories to kids.

'If the author wrote any more books about the Fabulous Four Fish Fingers I would buy them all.' The Guardian.

'This is undoubtedly the perfect reading material for both boys and girls aged 7+ - plenty of humour, kids with superpowers (and we all know boys in particular wish they had superpowers) but most of all it has heart.' Lovereading4kids.

'He arrived today and totally swept our pupils away, he is as his books, enthusiastic and completely committed to making the reading experience as enjoyable as possible. During our assembly he had them grinning from ear to ear as he re-enacted scenes from his book.' Christine Brown, Wheelwright Lane Primary School, Ash Green, Warwickshire

"Assembly was amazing and all the staff and children said how much they enjoyed it. Thanks again and we will not hesitate to recommend you." Laura Darley, KS2 Leader, Parklands Primary School, Leeds

"The children had a fabulous time and those that weren't involved in the workshops greatly enjoyed the assembly. I had several teachers see me this morning and one of them said and I quote "Jason is the best author we have had in school." Helen Whiteley, Allerton C of E Primary School, Leeds

'You were amazing, so much energy and whizz, it was great to see the faces of people watching what was going on. You were inspirational and have shown youngsters in Coventry what it is possible they can acheive.' Sorrelle Clements, Library Services Manager, Coventry

Finally, here I am on the ITV Calendar news....

...and performing a song about a villain from my first book called Addicted to Pants! 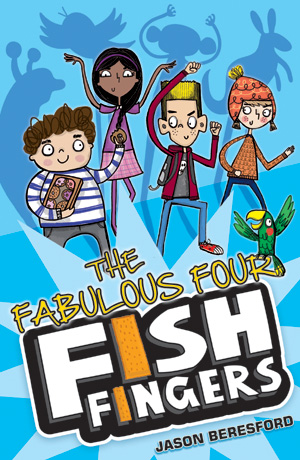 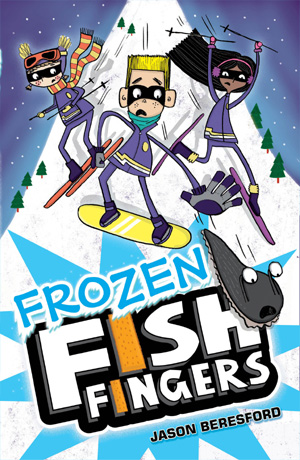 The Fish Fingers are back, on a school trip to Transyldovia. Fun with flying pigs, vampires, beetroot, and a runaway toilet. 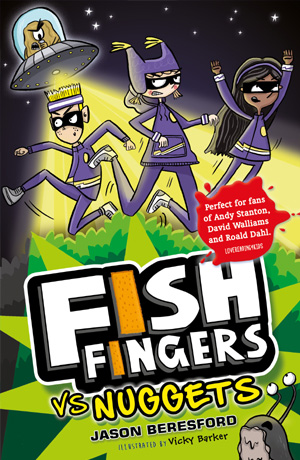 The gang of superhero kids battle aliens who are the same shape and size as chicken nuggets (but who wear very tight trousers.)