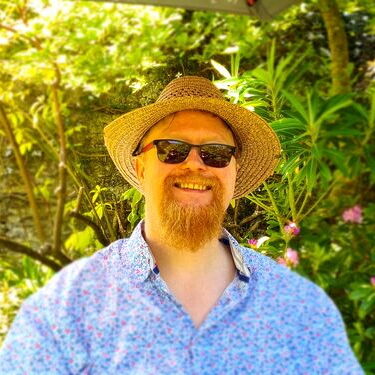 Children’s book author Brian Frederick enjoyed creating his own worlds and being an insatiable reader from an early age. He always wanted to be a writer, having won praise and awards for his early stories, and was particularly inspired by the Narnia stories. When he writes, he finds himself entering a bubble of creativity, allowing his mind to wander into an imaginary realm.

Brian grew up in Northern Ireland, during “the Troubles” and went to a posh school where CS Lewis was once a pupil and Samuel Beckett briefly taught. Brian made the sports pages as a champion swimmer, travelling widely and representing Ireland as well as being a serial holder of records. He says he may have been more dedicated to training than to his studies at times.

After school, he studied for a Law degree at Southampton University, before taking a Master’s in Law at Queen’s University, while he enjoyed all that student life had to offer. A legal career beckoned, of course, and he pursued it, but it turned out that Brian liked being a writer more than being a lawyer.

“I much prefer writing stories to writing writs,” he quips.

Whether the story is about embracing enthusiasm and good cheer, or finding gratitude in the little things, Brian’s characters are blessed with good fortune and exhibit mindfulness and kindness. In Brian’s picture book, Siggy Loves Sausages, the magical little dog Siggy is rewarded for his positivity, and keeping his promises - with a sausage, of course!

Brian's philosophy is that a great book is one that shares the beauty in everyday life. His relatability to children is evident. Real events and local children delivering little bouquets of flowers to their neighbours inspired The Phabulous Phlower Phaeries, his forthcoming book for older children. Brian’s hope is that his stories impart gentle life lessons, with a tangible sense of creative wonderment, delight and joy, to his young readers.

Asked about his philosophy of life as a writer, Brian said:

“I don’t know if stories for children can change the world, but I hope they can make it a little better – certainly for my readers.

I do care that these and other important things are often in short supply when they needn’t be. Maybe my readers and I can change that together…”

When he isn’t writing imaginative life lessons for children - whilst listening to loud indie rock music on headphones - Brian enjoys following Manchester United Football Club and taking country walks with his wife, Harvinder (whose family hail from the Punjab).

Together they live in a small nature reserve, where their house is alive with birdsong and woodland critters run around the trees like a fairytale forest. Outside a few of the locals take a daily stroll with their dogs. One of the dogs is Günther the dachshund who inspired Siggy. It’s a perfect haven for storytelling. Especially stories about sausage dogs!

Brian has won awards, and been a guest on podcasts as well as being an in-demand article writer for adults in the legal and sports worlds. He is due to give a TEDx talk in late 2021.

Can Siggy Keep His Word? Will this sweet little sausage dog be able to resist his favourite tasty temptations, stay true to his pledge, and save a Big Birthday Surprise? Join Siggy, as he learns about the happiness that comes from keeping promises, during his romp through a fast and fabulous adventure that takes him into the deep dark woods, where magic sometimes happens...
978-1739906412

Can Siggy Keep His Word? Will this sweet little sausage dog be able to resist his favourite tasty temptations, stay true to his pledge, and save a Big Birthday Surprise? Join Siggy, as he learns about the happiness that comes from keeping promises, during his romp through a fast and fabulous adventure that takes him into the deep dark woods, where magic sometimes happens...

Do you believe in love at first sight? You WILL after this… Phyllis is excited to go with her parents to choose a dachshund puppy. When she gets there, she’s transfixed by the cute, cavorting pups as they play, but she can’t decide. Then, all of a sudden, one of them speaks to her…