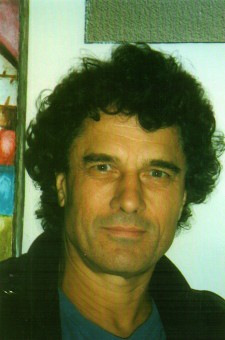 “The visceral intellectualism with which he attacks his subjects is exemplified in The Day the Grass Came which defines an ambitious work — and triumphs. The shorter poems are just as impressive.”
Melvyn Bragg

“I am overwhelmed, thrilled, lit up. Virile, vital, virtuosic. Stupendous. The underlying connections forging the whole piece into one great organic entity are profound and muscular. The earth moves.”
Simon Callow

“There is an energy in this collection which could leave readers gasping.”
Martyn Halsall, Church Times

This is a recording by a Berlin company. Somewhere in the Sky has been published in six anthologies, and is the title poem in one. It has been translated into Catalan, and featured in the Hong Kong Festival of Speech

Leo has performed his poetry in hundreds of universities, schools, libraries, as well as in theatres, cathedrals, night clubs, prisons, at festivals, and on radio and TV, on three continents. The age of his audiences has ranged from small children to senior citizens.

.
Leo has been touring a two-person show of his poetry called An Assortment of Sibyls, appearing with Prunella Scales in the Frome Festival, Bristol Festival, at Salisbury Playhouse, and the Theatre Royal, Bath and with Sara Kestelman in the Shoreham WordFest.
He has created a sequel to An Assortment of Sibyls, called The Trouble With Women Is Men, which was performed at the 2015 Frome Festival with Sara Kestelman,and the Belfast and Ashbourne Festivals in 2016 with Ruth Madoc.

He has several solo programmes prepared for festivals including an autobiographical talk of humour, anecdotes, and poems, called Why I’m not a Policeman.He performed The Day The Grass Came as a one-person play at the Pentameters Theatre. London NW3 in the autumn of 2016.

Over 100 of his poems have been broadcast by the BBC, mostly Radio 4, where for 4 years he was regularly commissioned to create poems out of current news stories.

In 2007, he completed Chaos & Pattern, a 5-film documentary series on world-beating scientific experiments, the series aimed at encouraging teenagers to take up careers in science and engineering.
(website: www.chaosandpattern.com ) .

He is one of the few poets to be listed in www.literaryfestivals.co.uk/

He was in the first running team to do the Land’s End – John O’Groats run.

9 poetry books. Most recently The Day The Grass Came. Also Dancing the Impossible; New & Selected Poems, Rhymoceros Poems for Children. Two books on the classical Greek theatre, and a traveller's history of Greece. Published in over 100 anthologies.

The Day The Grass Came

"Nothing safe and conventional. Vigour, enjoyment of playing with the fire of words and images, and an exuberant appetite for rhythms and sounds." Alan Brownjohn
Amazon

Poetry for children."I recommend his poems because they are funny and active for old and young people He did brilliant actions." Tom, age 8.
Amazon